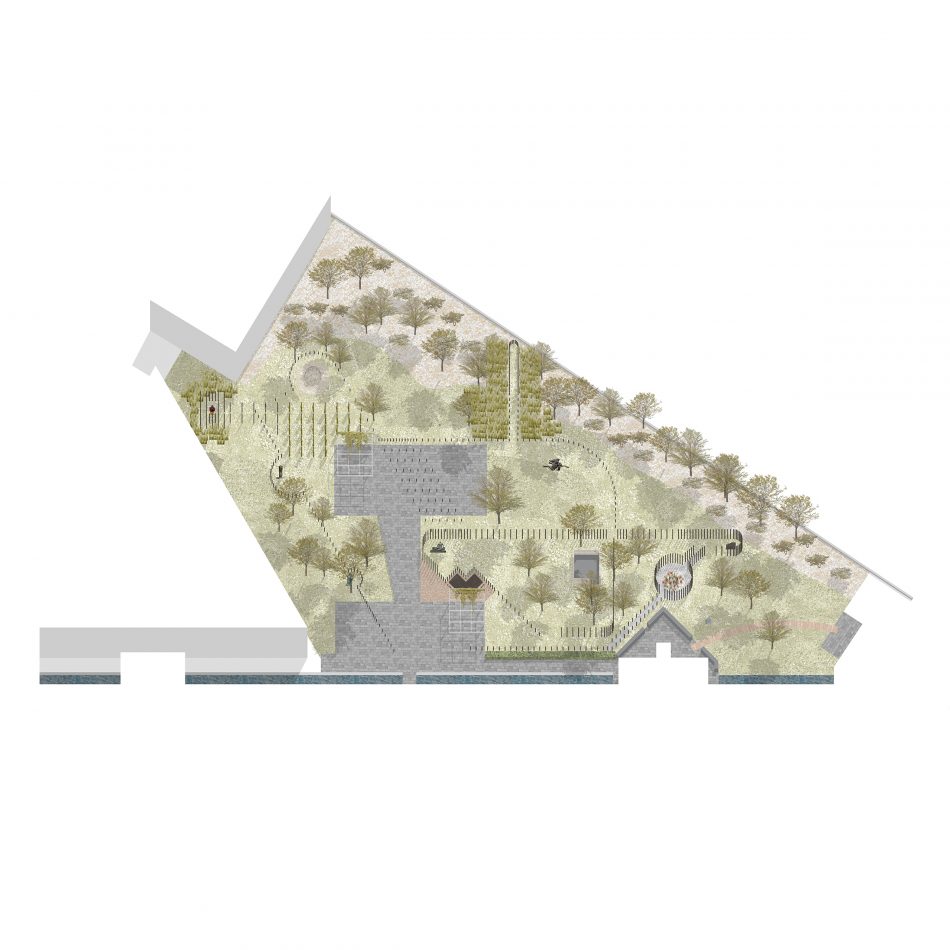 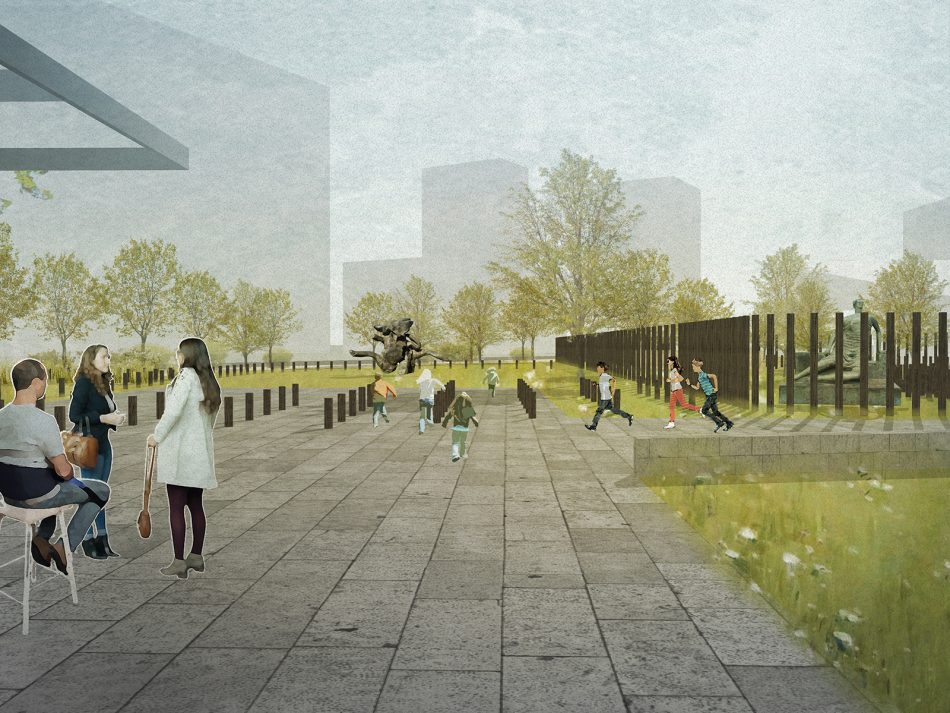 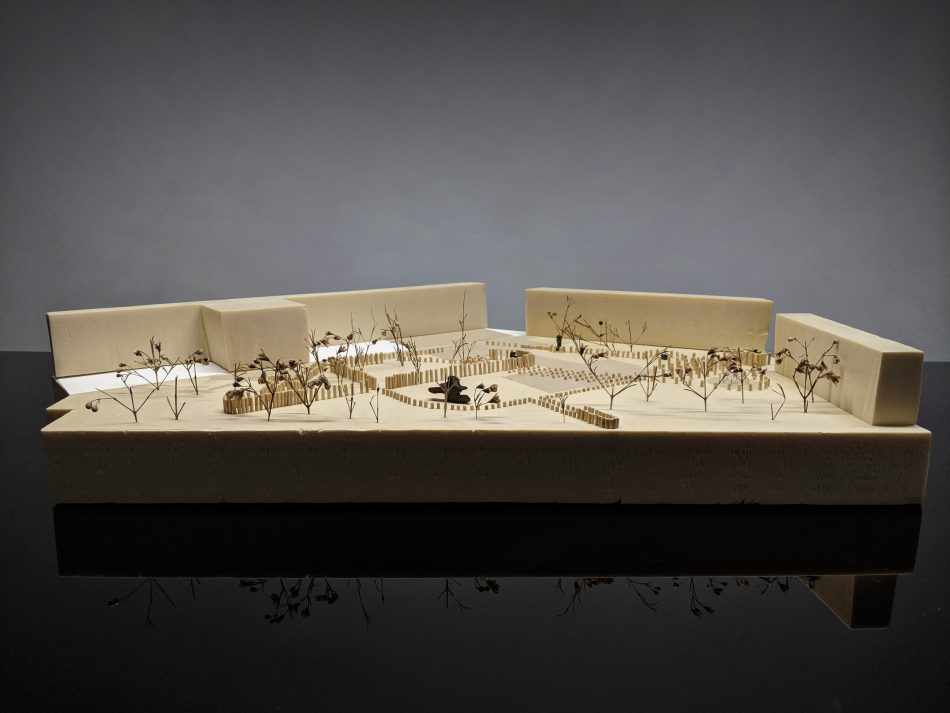 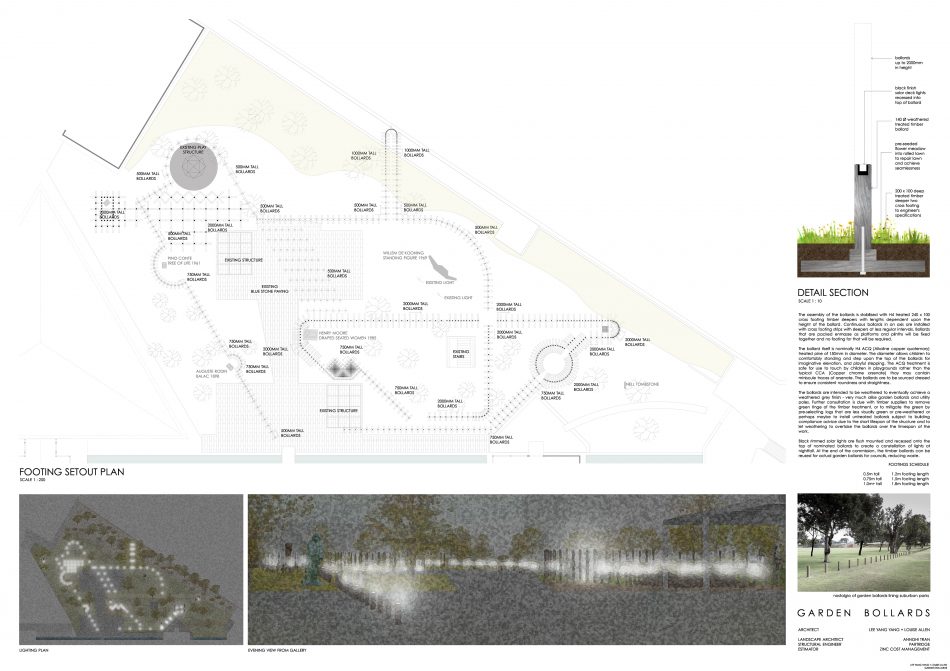 Our proposal is born from the question of safety in cities in our era of Trumpian xenophobia, the overreaction of the city installing anti terror bollards in response to car attacks and the perception of building walls and fences are necessary for safety at the sacrifice of sense of welcoming and openness in public spaces. While the discussion of urban security remains an issue of complex dimensions, with this pavilion we have intended to hark back to the humble garden bollards, simple and low natural timber poles that lines our parks that while also preventing car access to parks, they lies within our psyche of public parks, defining a malleable and soft territory within parks and the playful juvenile imaginations of garden bollards as stepping stones and zig zag runs.

The garden bollards dotted in a serial and linear manner, forming an invisible line that only exists in the mind. Bounding in response to the geometry of the surrounding buildings, regions of open air garden rooms defined within the park. The diagonal transverses the paved and the lawn seemingly joining and inviting passers-by to walk across the lawn. Then the bollards connects park paraphernalias, the sculptures, trees, playground not unlike a walking trail, reacting, marking and carving spaces around such objects in the landscape.

At one moment the bollards are arranged in a grid-like manner, marking a region of a space rather than an imaginary line, in the hopeful intention of being a gathering space, where the bollards present themselves as seats. And the other, tall bollards or rightfully poles in a grid, evocations of tree trunks in a forest setting. Childlike imaginations of playful running among the trunks, or of aimless meandering. The third structure, a culmination of bollards slowly merging into a mass structure, a stepped hill. A prompt for climbing experiences and standing on the top of the plinth.

The densities of the bollards change, denser and intensifies the enclosement of boundaries. And serendipitously the height of the bounding bollards grows taller and slowly morphs into a fence. Impeding movement and visual transparency, objects beyond the fence becomes landmarks of curiosity and hopeful pedestrians trail along the bollards to eventually breach into the forbidden territory.