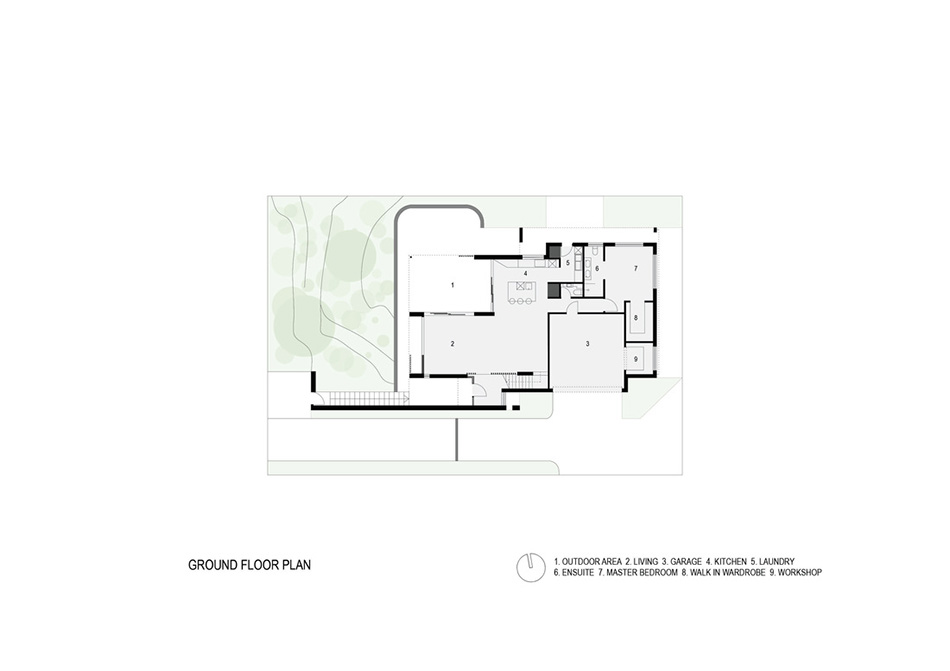 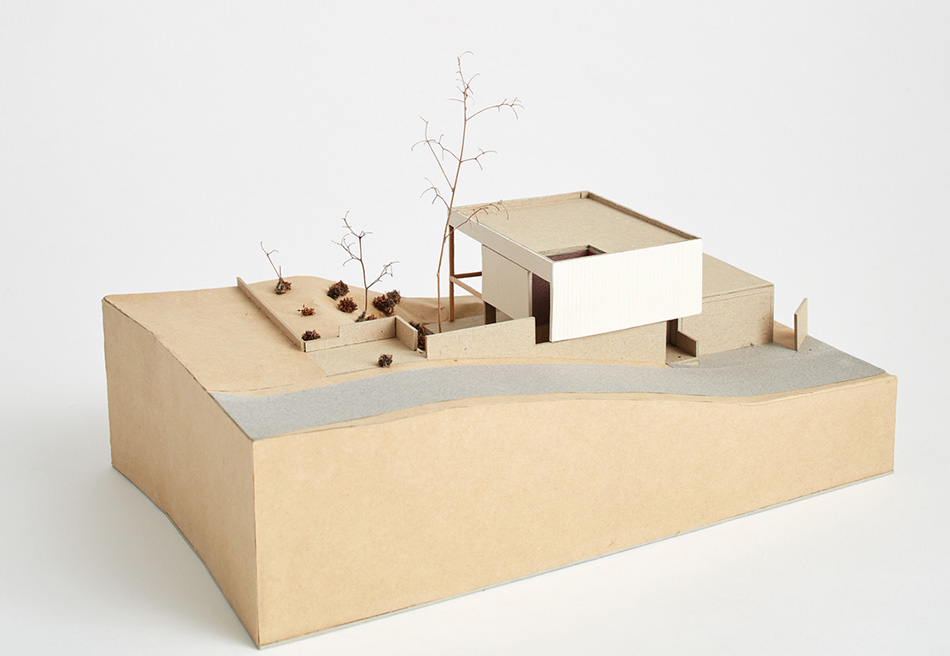 A new house in a leafy suburb of Perth, replacing the owner’s original home previously on the same block. An existing terraced garden the link to what was there before. This forms the focus of the new home, which begins as a double storey west-facing block with outdoor northern void and entry void recessed into the block, providing internal spaces diffused light. And at the lower garden level, the house embraces to bring the outside in.

A new house on the leeward side of a beach-side dune in Scarborough.

Three storeys each interact with distinct aspects of the site. The house engages with the street through the gesture of a courtyard, which collects northern light and sea breeze. A bay window frames distant views and closer views down to the pool. Below, a family room cuts into the dune and opens out toward the backyard. Above, the master bedroom and study connect further afield and lead to a turret, a viewing platform that looks out toward the Indian Ocean. 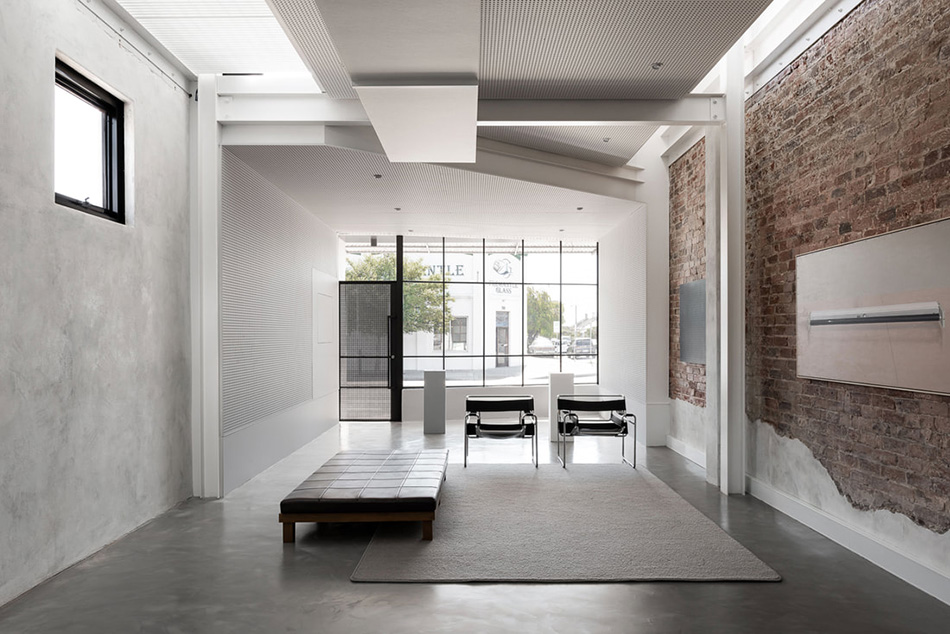 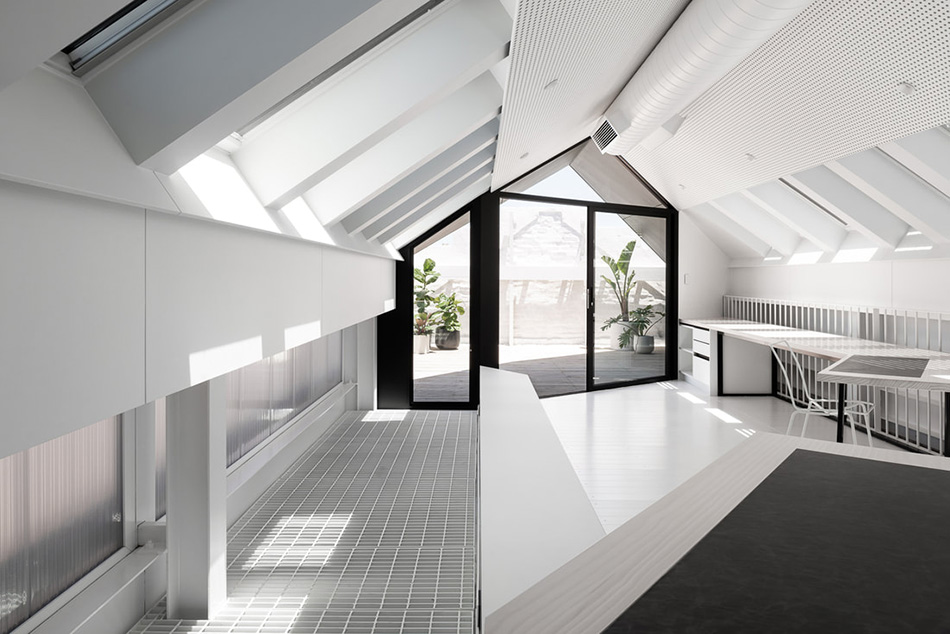 Originally as a shop, then as a home, now re-modelled as a series of flexible spaces to serve as a temporary residence for the owners with the ability to switch to an office in a few years.

Insertion of a floating mezzanine home-office space, pulled back from the edges of the building to admit daylight to the ground floor and to introduce spatial connection between the levels.

Internally, a monochrome interior predominates to provide a neutral backdrop to the clients’ collection of objects and art, and calmness in smaller spaces. 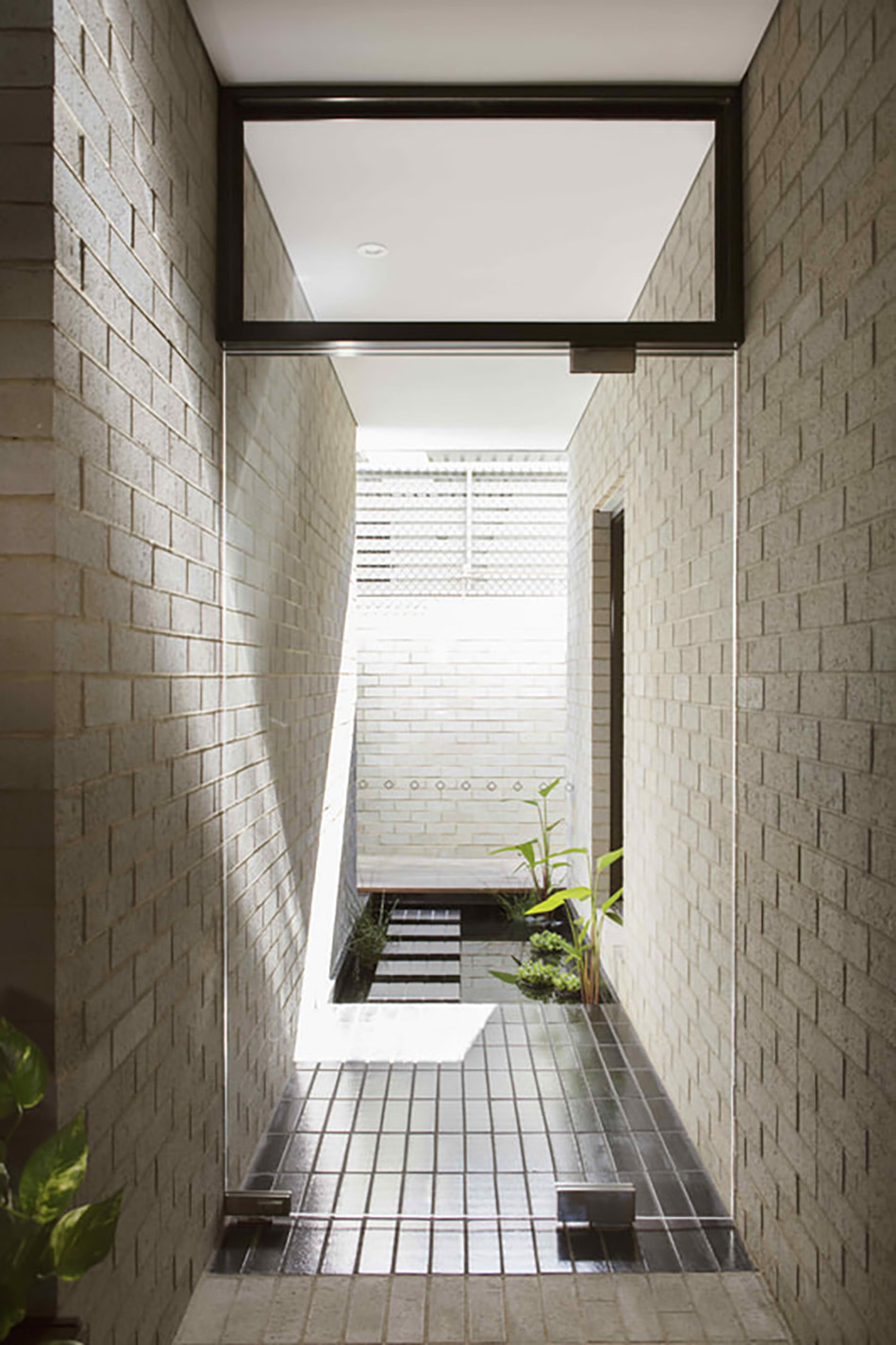 A home that provides a place of recuperation and solace, yet is equally enmeshed within the diverse suburb of Fremantle. A robust house with a sense of grounding, a constancy in contrast to the flux of the owner’s fly-in fly-out profession.

A compact home spiralling from an introverted perforated grey brick base and trellis garden, upward through a light-filled first floor, to a roof-level terrace, which connects the dwelling to its surrounds.

An addition that is separated from the existing cottage by a brick link that pauses between the two built elements – both spatial and chronological –  tailored to owner’s salvaged bricks.

The addition: a timber-framed carved into from its northern diagonal point, going west, creating a reveal that protects glazing from the summer sun, fitted with rotatable fins and battens for sun and privacy.

Climbing plants to claim this structure over time — connecting the garden and roof terrace; that is positioned and curtailed to reduce overlooking, yet pointed towards the view of the city.

An airy and light-filled extension with a focus on the verdant garden and borrowed vegetation further afield. 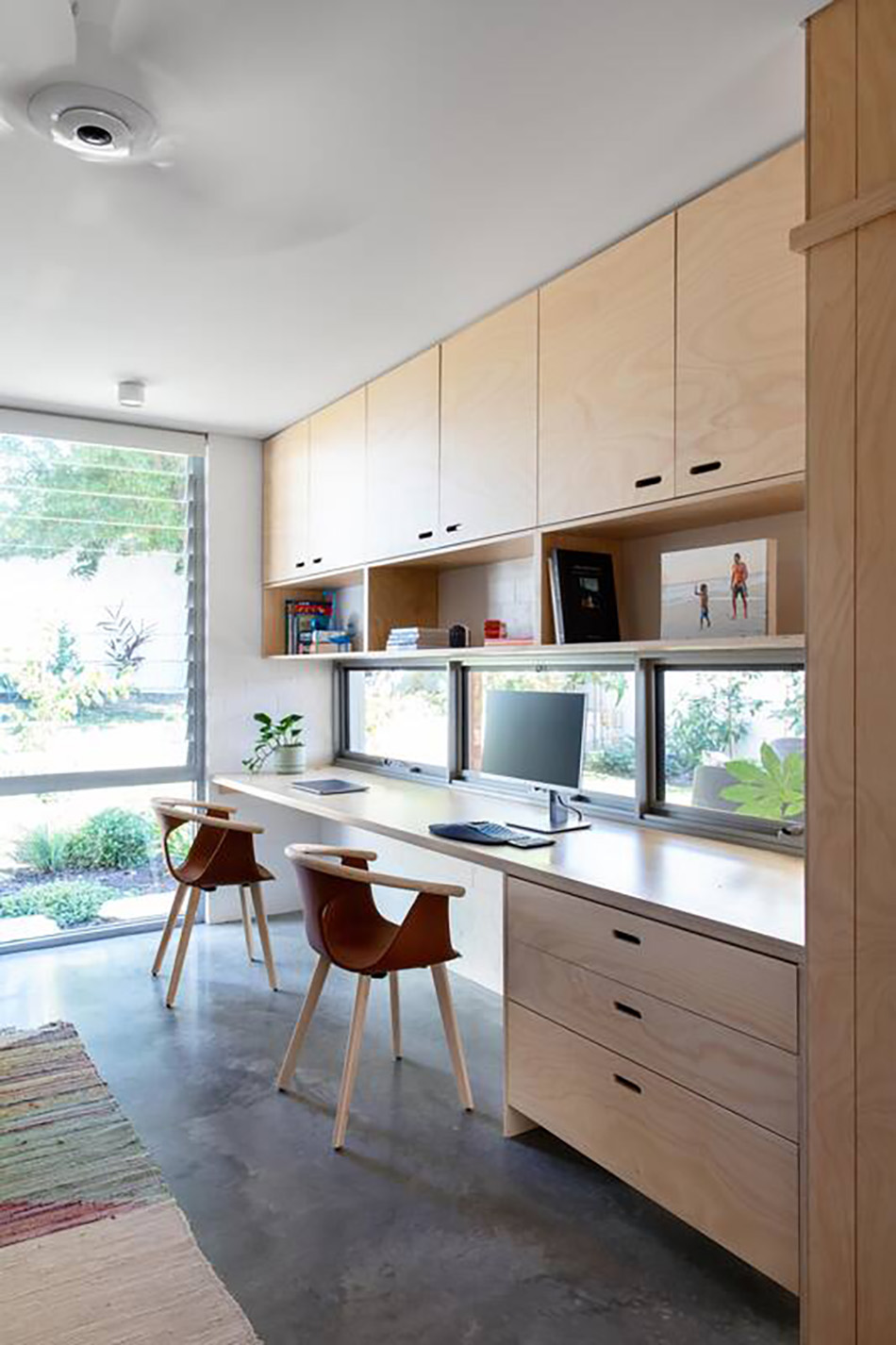 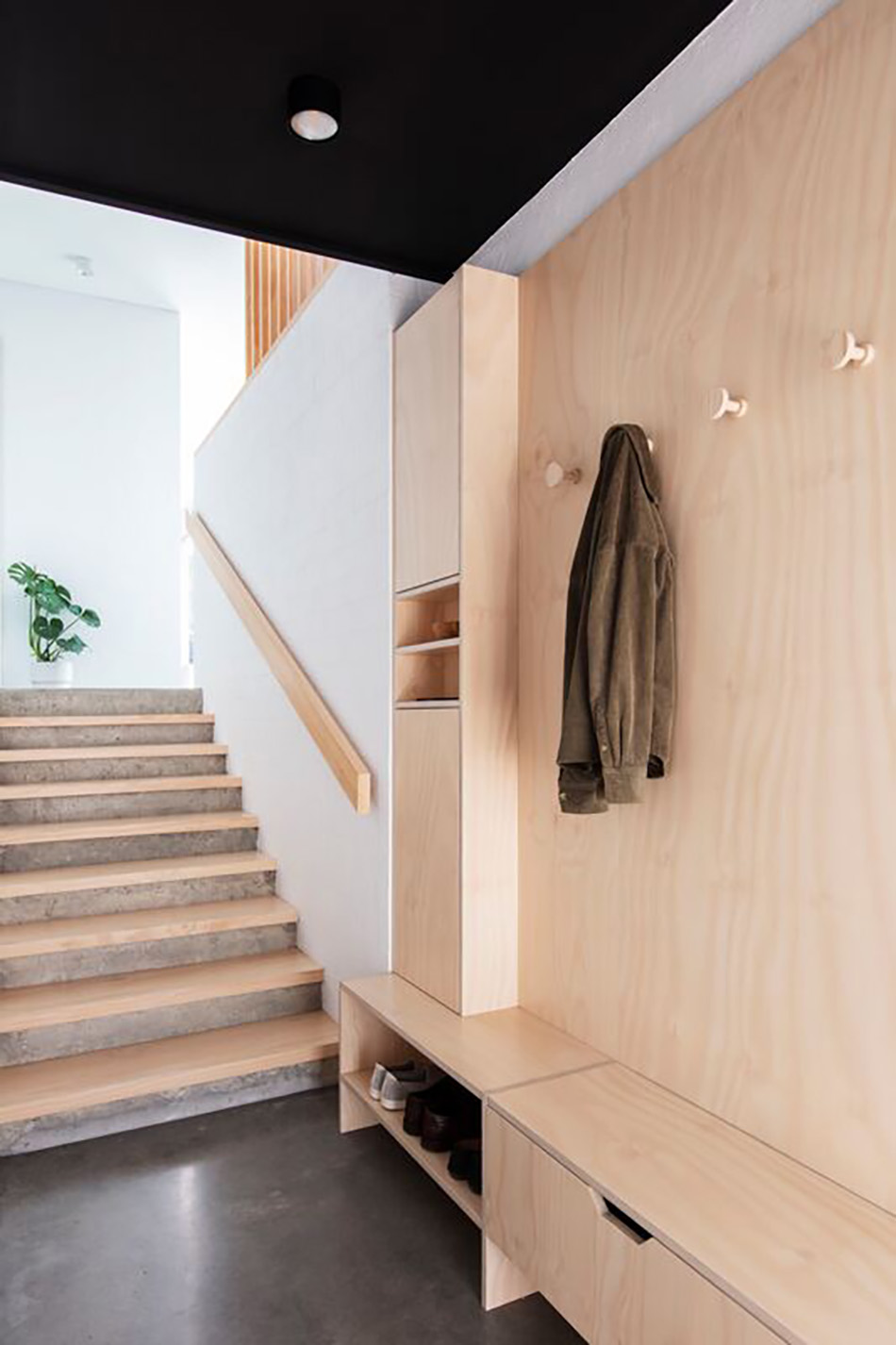 A house for a young family with a love for the beach, water-sports, cooking and community. The concept for the design was built around a certain nostalgia: … memories of barefoot journeys across hot dunes, surfboards under arm, sinking into sand, low silver bushes scraping at ankles, anticipation of the water palpable.

We imagined such a journey across our clients’ site, itself formerly the leeward slope of the final dune before the sea, wanting to design the home around the narrative of this lazy meandering, this quintessentially Australian journey.

So we described a path across the site, up the hill, and built the house around it.

An open carport at street level allows physical passage as well as visual access under and through to the garden, itself a gentle upward slope with endemic vegetation and orientation to secure generous northern aspect to the internal spaces.

The house situates itself around this central garden, with views back down the slope to the street, connecting private living spaces with the wider community context.

A second garden space exists to the west, with the main living room having access to both.

The house is designed to allow a casual and carefree lifestyle. Materials seek to imbue the home with a robustness required for everyday life, yet also a softness and flexibility — dappled light and blurred boundaries.

Wednesday, December 30th, 2020 at 4:10 AM
BUILT, uncategorized
Comments Off on ASCENDING COURTYARD HOUSE